“How like a winter hath my absence been from thee….”

The East Devon lost their fixture at Bishop’s Court, Ottery St Mary on 1st March this year due to the very wet spell – and any hopes of a re-arrangement went the same way. They did not even get to the coronavirus season.

Point-to-points organised by the East Devon Hunt have had various homes over the years. I have a record of the 1933 meeting being held at Ottery St Mary, I guess not at the current track? From 1934 the old form books show the meeting varying between Clyst St Mary and Clyst Honiton. Quite a few familiar names graced those cards. The meeting on 15th April 1936 saw horses running in the Members’ ridden by Norman Down and Jack Cann (fathers of Chris and Grant respectively).

On 19th May 1951 the point-to-point book for that year shows the venue as Dunnabridge near Princetown, which was where Mr Spooner’ Harriers raced. I suspect this was a one-off postponement due to the wet spring that year.

The fixtures between 1965 and 1968 were held at Stafford Cross where the Axe Vale now race. On 12th April 1969 the races moved to Hayes Barton, Clyst Honiton, with Chris Down winning the opening hunt race on Candid Secret.

A left handed track that suited stayers, Clyst Honiton remained the East Devon’s home until the final fixture there in 1978. Bishops Court, Ottery St Mary hosted the action on Oliver Carter’s farm for the first time on April 4th 1979

If you will forgive a few personal memories, my first experience of the Clyst Honiton course was on Wednesday 3rd April 1975, having travelled on from the previous day’s busy meeting of the Heythrop at their excellent old Fox Farm track, near Stow-on-the-Wold. I had seen the promising amateur jockey Nicky Henderson (turned out to be a better trainer than a jockey) ride a winner called Road Race trained by Jenny Pitman at Fox Farm on that day. The Tuesday fixtures at Fox Farm were classics at that time, with the Lord Ashton of Hyde Cup over four miles the feature.

I had worked for David Coulton’s Pointer Form Guide (as I still do today) for a few seasons by then, as well as covering some meetings for the old Sporting Chronicle and the Sporting Life (Michael Williams). I also covered a few meetings for Horse and Hound (Hugh Condry) and was a regular contributor to Ray Gould’s short lived form book Hunterguide. My long association with the Hunter Chasers and Point-to-Pointers form book was in its early days, taking me to most of the Midlands tracks. At that time the book was under the editorship of Geoffrey Sale and Iain MacKenzie. If I remember correctly Charles Lockyer and Maurice Maude provided press coverage for the local point-to-points in Devon & Cornwall

The race card for that 1975 meeting of the East Devon stated that the meeting took place at Clyst Honiton by kind permission of the Church Commisioners. I cannot remember seeing any clergy on that day 45 years ago.

Looking back now, this meeting attracted some of the best horses and jockeys of the era. We didn’t realise it then, but a future Whitbread Gold Cup winner was on show that day. Otter Way, in Oliver Carter’s familiar white with red hooped sleeves, was a top class point-to-pointer and hunter chaser who went on to win the Whitbread Gold Cup at Sandown in 1976 ridden by Jeff King. Otter Way also won the Horse and Hound Cup at Stratford twice. Grant Cann rode him in 1976 and he won that same race again in 1982 with A J Wilson in the saddle.

He must have been a certainty for the East Devon Moderate race in 1974! The runner up on that occasion was Faberstown (Ray Alford), who was a consistent pointer and unlucky not to beat Otter Way after making a bad mistake three out. Wentworth Treasure ran his usual game race to finish third, just ahead of the useful mare Lady Christine.

The Men’s Open winner Rich Rose was a top class pointer who won 18 times in all for his owner/ trainer Max Churches. He had expert assistance from the saddle in two-times champion point-to-point rider Richard Miller. He was all out to beat the ill fated Ben Dene. Weather Permitting was well held in third under Ron Hodges, but went on to give his owner/trainer Martin Pipe his sole success in the saddle at Bishopsleigh the following year. 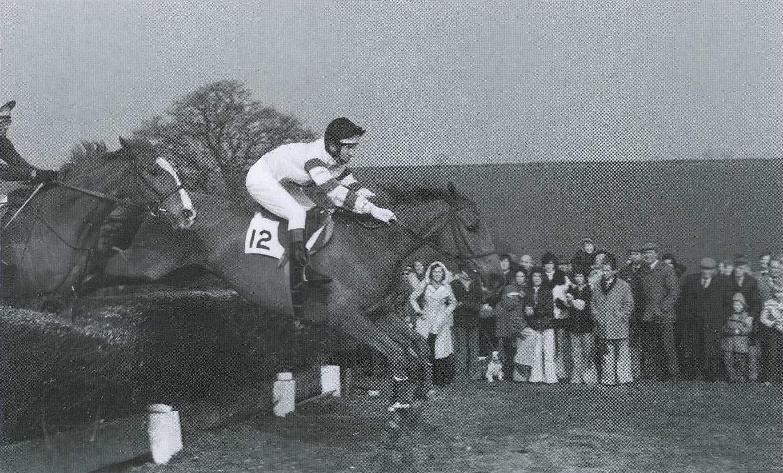 Galloway Fabulous turned out to be one of the most reliable and consistent Ladies’ pointers of the decade. He was described in the annual as “ultra game, a fine jumper and almost invincible in Ladies’ class.” Mr Reddaway’s gelding eventually retired with a total of 30 wins and 24 places to his credit (including a hunter chase). He won six races at 13. Beaumel was in the twilight of his career having won 22 races from 1967 onwards. He was a fine jumper and stayer. Dialstone ran his best race of the season and had every chance until weakening at the last.

Fracto Nimbus won the Hunt race unchallenged given an enterprising ride by Chris Down, who went on to finish runner up on Capelena in the concluding Maiden. That Maiden race was won in a desperate finish by Martin Pipe’s Clock Corner ridden by a young Ron Treloggen. The winner was written up perhaps unfairly as, “Ungenuine and made heavy weather of winning at the 43rd attempt”. John Cork’s Capelena was however the future star. She was a small mare who relished soft ground and long trips. I remember seeing her win over four miles at the Cheltenham hunter chase evening meeting a couple of years later, and she subsequently bred good winners including Elver Season. Frank Ryall’s mount In Again, who was third, was owned by my dear friend, the late Peter Wakeham, who will be known to many for his commentaries in the area for many years.

I drive past Exeter Airport on the A30 on my way to Devon & Cornwall meetings nowadays. I often think back to that day nearly half a century ago, a memorable afternoon on a long since abandoned point-to-point course nestling in the fields just behind the airport.

Your Rights As A User of pointingdc on WordPress.com Services

What is a Point-To-Point?

This is a formal announcement to confirm that the British point-to-point season is closed for this season.

This was a very difficult decision to make recognising that many people’s livelihoods are involved. However, the Prime Minister’s words last night made clear that everyone should minimise social contact and non-essential travel. Furthermore, our sport creates some medical burden, both on the course and potentially at the hospitals, where it would be unwelcome under the current circumstances.

The PPA would like to take this opportunity to thank everyone who has worked so hard to keep this season going so successfully until now, often under very trying circumstances. We will now be working on preparations to ensure that we start next autumn in the same successful manner as last, and will soon be in touch with many of you for your thoughts and ideas.

As a result of the government’s revised Covid-19 restrictions around travel, social contact and emergency service support the organisers are unable to go ahead with this fixture.